In this tutorial, we are going to make four types of guns that commonly appear in 2D top-down shooters. Specifically, they are as follows.


Since this tutorial will focus on gun creation, the following has been prepared in advance.

A scene called “World.tscn” was prepared, and the appearance was simply created by adding a “TileMap” node. In addition to the “TileMap” node, a “Player” node and several “Obstacle” nodes were added. For these, we created individual scenes and added the instances. 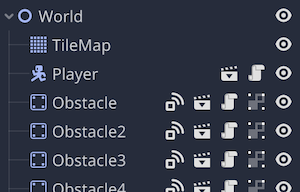 Created as “Player.tscn” scene. The root node is the “KinematicBody2D” class, and the “Sprite” and the “CollisionShape2D” were added as child nodes. The texture of the “Sprite” node is a hitman with a gun. A node named “Muzzle” of the “Position2D” class was placed at the tip of the image of the gun held by the hitman. This will be used later to specify the position where the bullet instance is generated when the gun is fired. 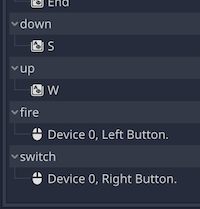 Note that, for the sake of brevity in the tutorial, the player character’s sprite remains the same, even if the gun type is changed. Let’s say it looks like a handgun, but it can be a machine gun, a laser gun, or anything else.

We created a scene called “Obstacle.tscn”. All the brown crate objects on the screen are instances of this scene. The root node is the “StaticBody2D” class, and the “Sprite” and the “CollisionShape2D” were added as its child nodes.

With these preparations, when the project is executed, the world, hitman, and obstacles are drawn as shown below, and the hitman is currently only capable of movement operations.

The project files for this tutorial are located at GitHub repository . If you download the .zip file and import the “Start” folder into Godot Engine, you can start from the project with only the above preparations completed. If you want to check the completed project immediately, you can import the “End” folder.

In addition, all of the assets that have been imported into this project were downloaded from the KENNEY website. We would like to thank KENNEY for providing us with a wide variety of very easy-to-use assets with the license CC0. The following asset packs were used this time.


Now let’s proceed with the implementation of the gun.

Then, edit each node.

That’s it for adding nodes and editing the properties of each node.


Now we will attach the script to the root node and start coding.


Next, let’s connect the signal that is sent out when the bullet hits the physics body to this script. Since the root node “Bullet” is an “Area2D” class, select the root node “Bullet” in the scene tree dock, select the “body_entered(body)” signal in the node dock > Signal tab, and click “Connect” button to connect it (or double-click the signal name).
body_entered signal connected

Once connected, edit the automatically added method _on_Bullet_body_entered as follows.

Note that I have already added the root node of the “Obstacle” scene to the group “Obstacles” in advance. 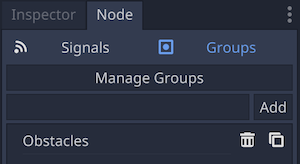 
We will add one more signal. Let’s connect the “screen_exited()” signal, which is emitted when the “VisibilityNotifier2D” node disappears from the screen, to the “Bullet.gd” script. The procedure is the same as the previous signal connection, just select the “VisibilityNotifier2D” node in the scene tree dock and connect the “screen_exited()” signal in the Node Dock > Signal tab. 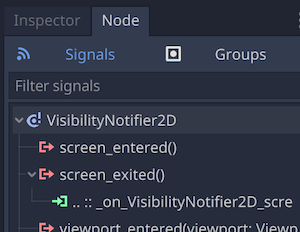 Once connected, edit the automatically added method _on_VisibilityNotifier2D_screen_exited as follows.

The bullet will now be freed when it goes off-screen.


The bullet scene is now complete.

Let’s start with the simplest handgun (pistol) to shoot. The script to be edited is the “Player.gd,” but since some code has already been prepared in the preliminary stage, let’s check that first.

So the fire method is currently empty. Update it as follows.

The method put_bullet appears here, which is the method we are going to define. Let’s define it by adding the following code under the fire method.


You should now have a handgun implementation. Let’s run the project and check it out.

The next step is to implement a shotgun. A shotgun in a top-down shooter would generally be designed to have multiple bullets each flying forward at a slightly different angle. This is a powerful gun that can wipe out multiple objects over a wide area in a single shot.

Added a second if block to the fire method. If the property gun has a value of 1 (the assigned number of the shotgun), the shotgun can be fired with a left mouse click. The content of the if block calls put_bullet 5 times in a for loop, but unlike the previous handgun, the argument is passed n, the number of times around the loop. We will see how this method handles the arguments it receives as we update the put_bullet method later.

It is a little complicated, but if the argument dir_offset is not entered when the method is called, the default value of 2 is automatically passed as an argument. The third line in the method block specifies the rotation angle (direction) of the bullet, but in the case of a handgun, for example, the method is called without specifying an argument, so the default value of 2 is passed as the argument, the 20 - 10 * dir_offset part becomes 0, and the bullet’s angle is the same as the player character is facing.

On the other hand, in the case of a shotgun, this put_bullet method is called 5 times in the for loop in the fire method, and the number of loop laps n (counting from 0 to 4) is passed as the argument dir_offset. Therefore, the angle of the bullet changes as follows, depending on how many times the loop has looped.

With the above code, five bullets are fired simultaneously at different angles of 10° in the range from -20° to +20° relative to the direction the Player is facing, completing a gun that can fire a wide range of bullets at once. The computer processes a loop of about five times in an instant, so the bullets will be fired at different angles at about the same time.


You should now have a shotgun implementation. When you run the project to check it out, click the right mouse button once to switch to shotgun and then try firing it.

Now let’s add the code for the machine gun to the “Player.gd” script.

First, we added the property interval.

The specification of the machine gun is to automatically fire bullets continuously if the left mouse button is held down, but if the fire method is called every frame in the _physics_process method, the interval between bullets is too short and the bullets appear to stop (see GIF image below).

The frame rate of 60 FPS for the physical process is quite fast. So this time, we will add +1 to the interval property every frame so that a bullet is fired when the count exceeds 5. In other words, the bullet will be fired once every 5 frames.

So let’s add an if block for the machine gun to the fire method.

Note that the handgun and shotgun use the is_action_just_pressed method of the Input class for the if condition, but this method does not continuously detect the input even if the left button is pressed continuously. On the other hand, the machine gun uses the is_action_pressed method. This method has a similar name only without “just,” but this one is suitable for use in “press-and-hold” operations, since input is detected every frame even if the button is kept pressed.


You should now have a machine gun implemented. When you run the project to check it, click the right mouse button twice to switch to machine gun and then try to fire it.

The last step is to implement the laser gun. A laser gun fires lasers, not bullets, so let’s start by creating the scene of the laser being fired. Add particles and animations to give it a minimal effect.

Next, edit each node.

This completes the process of adding nodes and editing the properties of each node.


From here, attach the script to the root node “Laser” and start coding.

A few additional notes on this code. In the script “Obstacle.gd” attached to the root node of the obstacle scene “Obstacle.tscn” that has been created as a preliminary step, two properties, irradiated_time and max_irradiation, are defined. The former is the irradiation time of the laser, and the latter is the maximum irradiation time of the laser. This system was created based on the idea that rather than destroying obstacles immediately after the laser strikes them, it would be more laser-like if the obstacles were destroyed after a certain amount of time (maximum irradiation time: 0.2 seconds).


The laser scene is now ready. The next step is to update the “Player” scene so that it can fire the laser.

Now that we have a laser scene, let’s implement the laser gun. The first specification for the laser gun is to add an instance of “Laser.tscn” created earlier to the “Player” scene when it fires. The player’s control should be the same as that of the machine gun, so that the gun will continue to fire as long as the left mouse button is held down. On the other hand, when the finger is released from the button, the “Laser.gd” script coded earlier will make the laser disappear and the instance will be released.

Now let’s edit the “Player.gd” script in concrete terms. First, I want you to add the fourth if block in the fire method as follows.

The fourth if block I added calls the load_laser method as long as the left mouse button is held down when the gun is the laser. This method is just about to be defined. Let’s add the following code under the put_bullet method.


That completes the implementation of the laser gun. When executing and checking the project, click the right mouse button three times to switch to the laser gun before firing.

After it was completed, I realized that the laser might have been better in another color. It looks like a water gun or a high water pressure washer.


Let’s run the project one last time, switching between the four guns as we play.

This time, we implemented four types of guns that are often implemented in top-down shooter games. If you want to make them more detailed, it might be more interesting to add the following elements, for example