In this time, we will create a bullet hell aka barrage for a barrage shooting game. The bullet hell is a large number of bullets (or similar long-range attacks) like a curtain. A “bullet hell shooter” is a game in which the player shoots at and defeats enemy characters while dodging and weaving through the gaps between the bullets. Some games specialize in simply dodging the bullets. Many games are based on the motif of spaceships and fighter planes that fit the image (in this tutorial, a ground battle between a wizard and a monster though).

All the assets imported into the project were downloaded from KENNEY website. I used an asset pack called 1-Bit Pack . I can’t help but be thankful for this wonderful free material.


Now, when you open the project in the “Start” folder in Godot Engine, the following are already created.
1.Player character (wizard) 2.
2.Player character’s long-range attack (magic) 3.
3.Enemy character (the monster who releases a barrage of bullets) 4.
4.Game world (the game world in which the above objects exist)


First of all, please run the project in the “Start” folder, where only the preliminary work has been completed, to see how it works.

The game is set up as follows.

To create a bullet hell scene, we need each of the bullets that make it up. Therefore, we will start by creating the bullet scene.

Create a new scene of a bullet by following the steps below.


Adding nodes to the scene#

Next, add child nodes to the root node “Bullet.

Editing the properties of the nodes#

Continue to edit the properties of each node.

No editing of the properties of this root node is required.

In this case, we will use the method of setting the sprite texture by specifying the range of textures to be used from a single sprite sheet that contains a large number of textures.

No editing of the properties of this root node is required.


Controlling bullets with a script#

Next, let’s program a script to control bullets. Let’s attach a new script to the root node “Bullet”. Create the file path as “res://Enemy/Bullet.gd”.

First, edit the script as follows.


Next, since the root node “Bullet” is an Area2D class, we will use its signal to make the bullet disappear when it hits the physical body. Select “Bullet” in the inspector and connect the signal “body_entered(body)” to this “Bullet.gd” script in the Node Dock > Signal tab.

Controlling the bullet hell with a script#

From here, we will edit the script “Enemy.gd” attached to the root node “Enemy” in the “Enemy.tscn” scene of the enemy character to control the bullet hell. After opening “Enemy.gd” in the script editor, let’s first define the necessary properties. In the following code, please add the code where it is commented “# Add”.

It may be a little difficult to visualize from the comments in the code alone, so a diagram is attached. 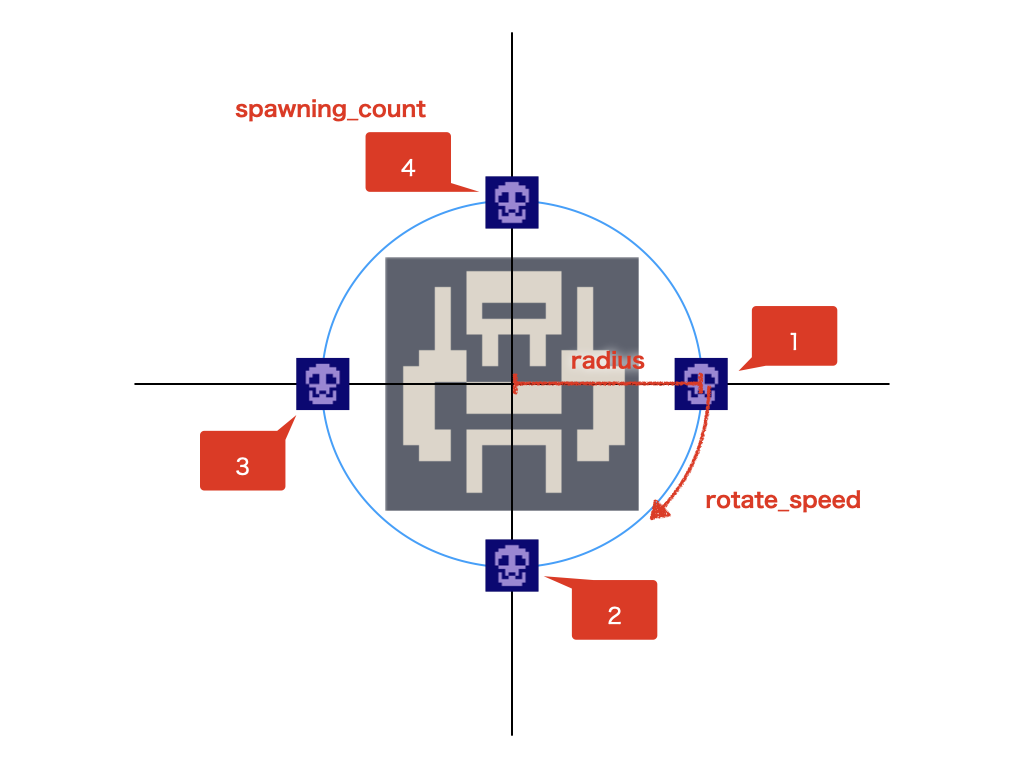 
Then edit the _ready method, which is called the first time the scene is loaded. In the _ready method, add the code for initialization necessary to generate the bullet hell. It should be easier to understand if you can visualize the above diagram.


Now, every time the “Timer” node times out, place an instance of the “Bullet.tscn” scene you created earlier at the same position as the child node of the “Rotater” node (the spawn_point in the above code), and the bullets should fly automatically. Now let’s edit the _on_Timer_timeout method called by the “timeout” signal of the “Timer” node. Since the signal has already been connected in the preparation, replace pass in the method with the following content.


The firing position still does not rotate, but for the time being, it should now fire the specified number of bullets at the specified time difference. Let’s run the project.

Next, let’s rotate the firing position of the bullets a bit to make it more like a bullet hell. This time, we will update the code in the _physics_process method a little. Please add the comment “# Add” in the following code.


Now the bullet’s firing position should rotate every 0.4 seconds as specified in the interval property. Let’s run the project again to see if it behaves as expected.

Properties defined in scripts can be easily edited in the inspector if the export keyword is added at the beginning. Let’s change the values to create a different bullet hell than the previous one.

Sample 2 has turned out to be a very devilish game. But what a thrilling and enjoyable experience.

At the preliminary stage, the appearance of the enemy character (sprite texture) is coded to be randomly determined from six different types. If the properties of the bullet hell are also randomly determined, it would be interesting because it is impossible to predict what kind of bullet hell will be unleashed each time. In fact, it is surprisingly easy to implement this script by just adding a few codes to the script described so far.

Now, open the “Enemy.gd” script in the Script Editor. First, define the upper and lower limits of each property to form the bullet hell that has already been prepared in a separate property. Let’s update the lines commented “# Add” and “# Change” in the following code.


Next, edit the _ready method, as we need to apply random values to each property at the time the scene is loaded. Let’s add the lines commented “# Add” in the code below.

A few additional notes on the generation of random values.

Next, randi is a method that returns a random integer, but since it takes no arguments, it is not possible to specify an upper or lower limit.

Therefore, we use the fact that the remainder when the returned value is divided by the upper limit is 0 or more and less than (upper limit -1). Since the maximum value is the specified upper limit -1, put a code max_spawning_count += 1 one line earlier to add +1.

The symbol % (modulo) can be used to obtain the remainder obtained by dividing a by b using a % b. If we add c to that value as a % b + c, the result cannot be smaller than c. In other words, a random integer with upper and lower bounds can be expressed as randi() % upper bound + lower bound. Remember that the maximum value returned is the upper limit -1.

In this case, the randomize method was written first, but without it, the result will be the same every time, so if you use methods that return a random value, it is good to remember to write it at the beginning of the _ready method.

Finally, let’s run the project to see if each monster that appears will have a different bullet hell.

In this tutorial, we created a bullet hell for a top-down shooter. For a rotating bullet hell like this one, the following points will be important.

There might be better ways to implement this, and I hope that you will experiment with various methods and finally adopt the best one.

In addition, actual bullet shooters are not only rotating types like this one, but are also diverse, such as wave-shaped, fan-shaped, etc. If you are interested in this, please look into it.