To focus on the creation of the homing missile, the rest of the project has been pre-created in advance.

All the assets imported into the project were downloaded from KENNEY website. I used an asset pack called Tower Defense (top-down) . I just want to thank them for making such a great asset pack available to the public.

The following game specifications, except for the homing missile part, which is listed as (planned), have already been prepared as a preliminary.

First, follow the steps below to create a scene for a homing missile.


Next, add child nodes to the root node “Missile”.

Let’s edit the properties of each node in the scene tree in the inspector.

The “Layer” property allows you to set which collision layer the object (in this case, the “Missile” node) will be assigned to.

To make it easier to understand which object is assigned to which collision layer, I have already named the collision layers to be used by following the steps below.

The “Layer” and “Mask” properties of the player character, machine gun bullets, and enemy characters have already been set as follows, according to the collision layer names above.


And I would like you to set up the homing missile you are editing now as well, as follows


Once we have edited the properties of the root node “Missile”, we should incidentally add this node by creating a group called “Missiles”. This is used to determine whether a missile is a missile or not when a machine gun bullet hits a missile.

The method of setting a texture for a sprite by specifying the range of textures you want to use from a single sprite sheet that contains many textures is used.

This node is a timer for homing missiles to self-destruct after a certain amount of time. If missiles continue to exist in the game indefinitely, the number of missiles will grow and the computer will run out of memory to handle them. To avoid this, the system is designed to release instances when the time expires. For missiles that fly in a straight line, it is possible to use the signal of the “VisibilityNotifier2D” node to release instances when they go off the screen, but for homing missiles that track the player character, a timer is more appropriate.


This completes the property editing for each node.


Controlling it with a script#

Next, we will create a script to control the missile. We want you to attach a new script to the root node “Missile”. The file path should be created as “res://Enemy/Missile.gd”.


Now, the missile should fly straight for the time being. Let’s run the scene and check it out.

Can you see the missile flying from left to right across the top portion of the GIF image?

Next, we will add the motion to track the player character to the script. First, let’s define some necessary properties. In the following code, please add the commented “# Add”.


Next, define the method by which the missile will steer toward the player character (correct its trajectory).


Since it may be difficult to visualize from the comments on the code alone, I will supplement this with a diagram. 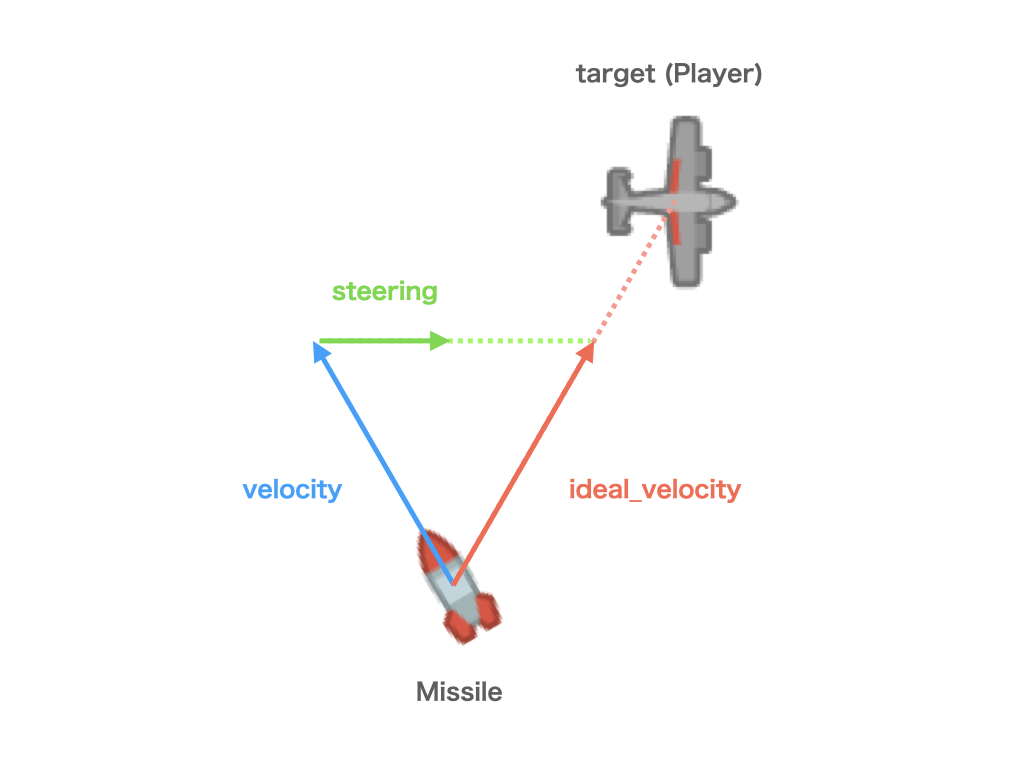 When the homing missile detects the player character’s plane, it will track it as a target. The ideal velocity is the variable ideal_velocity, assuming that the missile could travel in a straight line in the direction of the target. In reality, however, the missile is flying in the direction that the property velocity has, and we want to steer it toward ideal_velocity to correct its trajectory.

Now, let’s use the value of the variable steering output by the method steer to modify the missile so that it flies while correcting its trajectory. Please add the comment “# Add” to the method _physics_process.


This should have implemented the movement of the homing missile tracking the player character.

Let’s continue by adding a program for when the missile hits the player character or the machine gun projectile. For this, we will use the signal of the Area2D class of the root node “Missile”.

Now, after selecting “Missile” in the scene tree dock, go to the node dock > Signal tab and connect the signal “body_entered(body: Node)” to this “Missile.gd” script.

After connecting, edit the automatically generated method _on_Missile_body_entered as follows.

Now, when a missile hits the player character’s plane, it animates (flashes red) and the player’s Life is reduced by one, and the game is over when there are no more than 0 planes left.

In the block of the method _on_Timer_timeout generated by the connection, simply add the method queue_free.


The missile is now complete.

The next step is for the “Enemy.tscn” scene to create an instance of the “Missile.tscn” scene that we just created, so that the enemy character’s tank fires homing missiles.


Editing and controlling the script#

Let’s open and edit the “Enemy.gd” script attached to the root node “Enemy” in the “Enemy.tscn” scene.

First, let’s preload the missile scene file. At the beginning of the script, define constants for references. You will see the comment “# Add”.

Next, since the block of the method _on_Timer_timeout contains only pass, please update it as follows. Incidentally, this method was generated by connecting the signal “timeout()” of the “LaunchTimer” node (Timer class). In other words, this method is called every time the timer times out.

Please insert the following code defining the method launch_missile, which is described at the end of the above code, after the above _on_LaunchTimer_timeout.

The missile should now be able to be launched. Let’s run the project to see if the implementation so far works without problem.

For visual effect, we have prepared explosion particles when the missile hits and smoke particles coming out from behind the missile in the preliminary stage. Let’s use these by adding code to the “Missile.gd” script to give the missile a more visually appealing performance.

After opening the “Missile.gd” script, add the line “# Add” to the code.


Next, call the method that produces the smoke within the _physics_process method.


And let’s define the last method spawn_smoke as follows. This code should be inserted under the steer method.


Next, we now define a method to generate explosion particles. Add it under the method spawn_smoke above.


Let’s update the code to call the method explode at the three places with the following “# Add” comments.


That’s all for the update. Let’s run the project one last time to see the direction we added.

By the way, both smoke and explosion particles use the “Particles2D” class node. macOS seems to have some performance issues with this node. I’m a macOS user, and it certainly caused a delay. You may be able to see it in the gif image above. 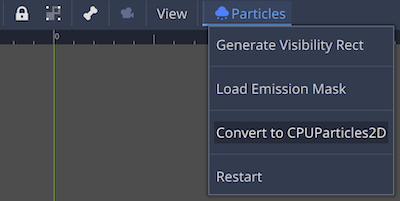 In this tutorial, we created a homing missile in top-down shooting. Let’s summarize the key points in creating it.

The YouTube videos and articles on KidsCanCode were very helpful in preparing this tutorial. I would like to take this opportunity to thank them. For a better understanding, we recommend that you also view those contents.