In this article, I will explain how to implement an effect, “screen shake”, in 2D games. It is not an absolutely necessary element of a game, but if used well, it can make the player’s game experience more interactive and directly affect the user experience. For example, there are many situations where it could be used, such as when a player fires a gun, takes damage from enemies, or falls from a high place.

By the way, this kind of element that is not necessary but makes the game more interesting by adding it is called “game juice” in English. I have one more vocabulary in English, and I am a little wiser now.

There are already many resources on the Web that explain how to implement screen shake, and of course there are methods other than those introduced here. This time, we refer to the following video and article in particular, so please check them as well for a deeper understanding.


The project file that will be created at the end of this tutorial is located in the GitHub repository . You can also check the project directly by downloading the .zip file and importing the “project.godot” file in the “End” folder with the Godot Engine.

Start Godot Engine and create a new project. You can name your project as you like. If you can’t think of one, let’s call it “Screen Shake”.

Once the editor appears, we should update project settings for the entire project.

Next, let’s download assets from KENNEY’s site and use them. This time, we will use an asset pack called “Tiny Dungeon ”. I will use the tileset included in this asset. I can’t help but be grateful for this wonderful free material.

Once downloaded, drag “/kenney_tinydungeon/Tilemap/tilemap_packed.png” to the file system dock and import it into your project.

Immediately after importing the file, the image will look blurry, so correct this by following the steps below.

The image should now have the edges characteristic of pixel art. The imported tileset will be used later when creating the tile map.


Editing the properties of the Camera node#

Continue to make the following edits in the inspector:


Attaching and editing a script to a Camera node.#

Attach a new script to the Camera node. Create a script file with the file path “res://Camera/Camera.tscn”.

This time, we will implement two types of shaking: “rough shake” and “smooth shake”. First, let’s start with “rough shake” whose code is relatively simple.

The script should contain the following code.

World Create a new scene and add the necessary nodes.#

Then add nodes so that the World scene becomes the following scene tree.

Let’s quickly create a tile map for the background.

Finally, run the project to test the “rough shake”. If you are running the project for the first time, select “World.tscn” as the main scene of the project.

Press the space key to shake the screen. Wait a little and press it, or press it continuously without a pause to check the behavior.

There is no particular discomfort, and it looks reasonably good. However, compared to the smooth shake that will be implemented later, it should look a bit rough.


Adding “smooth shake” code to the script for the Camera node#

From here, we will implement the “smooth shake”. Return to the Camera scene and add the code to the attached “Camera.gd” script. 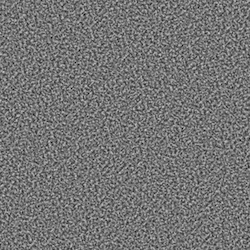 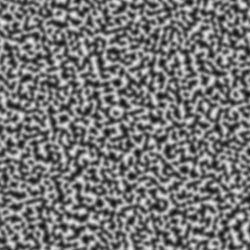 The noise image has a random distribution of white, gray, and black. The noise value varies from -1 to 1, with -1 for black, 1 for white, and 0 for intermediate gray. The idea is to specify the coordinates of a pixel on the noise, get the noise value of that pixel, and apply it to screen shake.

Godot provides a class (resource) called OpenSimplexNoise. You can create a new class in your script and use the get_noise_2d method, which is built into the class of this resource, to obtain the noise value at the specified coordinates by passing x-coordinate and y-coordinate as arguments. This time, the x-coordinate passed as the argument is specified randomly, the y-coordinate is shifted by 1 pixel, the noise value is obtained, and it is multiplied by the calculation of the shaking width to reproduce smooth shake.

By the way, you may intuitively understand how the noise changes when you change some parameters that compose the noise by trying various things on the following demo page using Godot’s OpenSimplexNoise.

The noise may seem a bit complicated, but let’s write a script for a start. In addition, we will make it possible to switch between “rough shake” and “smooth shake”.


Adding nodes to the World scene#

Add a “CanvasLayer” node and its child “Label” node to the World scene tree to make it easier to see which type of screen shake is being used on the screen. The name of the “Label” node is “TypeLabel”. 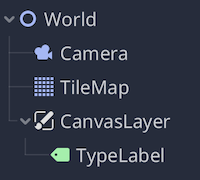 With the “TypeLabel” node selected, enter “ROUGH” as the initial value for the “Text” property in the inspector. 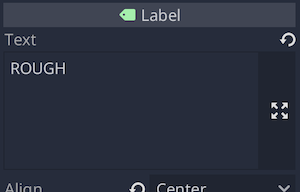 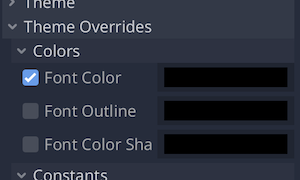 Select “Center” from the “Layout” on the 2D workspace toolbar and center the “TypeLabel” node. 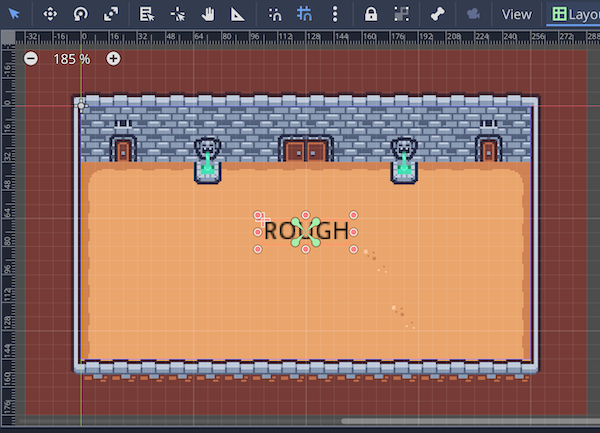 Attach the script to the “World” root node and save the file path as “res://World/World.gd”. In the script, write the following code for the operation to switch the type of screen shake.

The left and right arrow keys can now be used to switch between ROUGH (rough shake) and SMOOTH (smooth shake).

Finally, let’s run the project again to check the behavior of the “smooth shake” and compare it with the “rough shake” while switching the shaking type.

This completes the implementation of screen shake. I hope you could feel the difference. It may seem like a small difference, but if you are concerned about the presentation of the game, you will want to use the appropriate shaking for the scene.

In addition, we have prepared a separate project that makes it easier to visually understand the state of screen shake. Please try it if you like.

The sample project file is located in the GitHub repository . Please download the .zip file from there. You can check it by importing the “project.godot” file in the “Sample” folder with the Godot Engine.

The specifications of the sample project are as follows.

In this article, we introduced the implementation of screen shake in 2D. Although the game genre and scene may vary, there will be many opportunities to apply screen shake. If you understand how to change the parameters that constitute screen shake, you should be able to express screen shake in a way that best suits the purpose of use.