This article introduces a method for implementing simple hit detection for melee attacks in 2D games.

This is a commonly used method where the object to attack (e.g., player character) has a collision shape (called “Hit Box”) that is only active during the attack, and the object to be attacked (e.g., enemy character, destructible barrels, crates, grass, etc.) has a collision shape (called “Hurt Box). The hit judgment of the attack can be implemented by enabling/disabling the Hit Box and Hurt Box, and changing their size and position in accordance with the animation of the attack.

This is relatively easy to implement, so let’s get started. 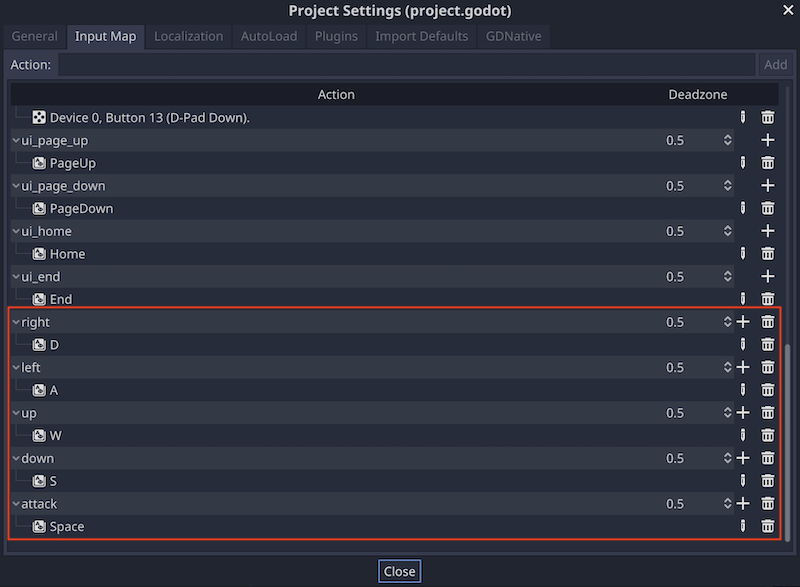 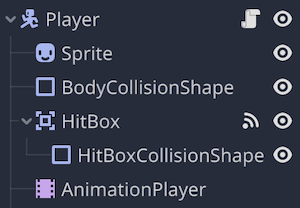 Edit nodes in the Player scene#

For the sprite sheet containing the player character’s melee attack animations, I downloaded and used the Pixel Art Dwarf Sprites from itch.io . In particular, we will use lines 3 to 5 as the animation for melee attacks. 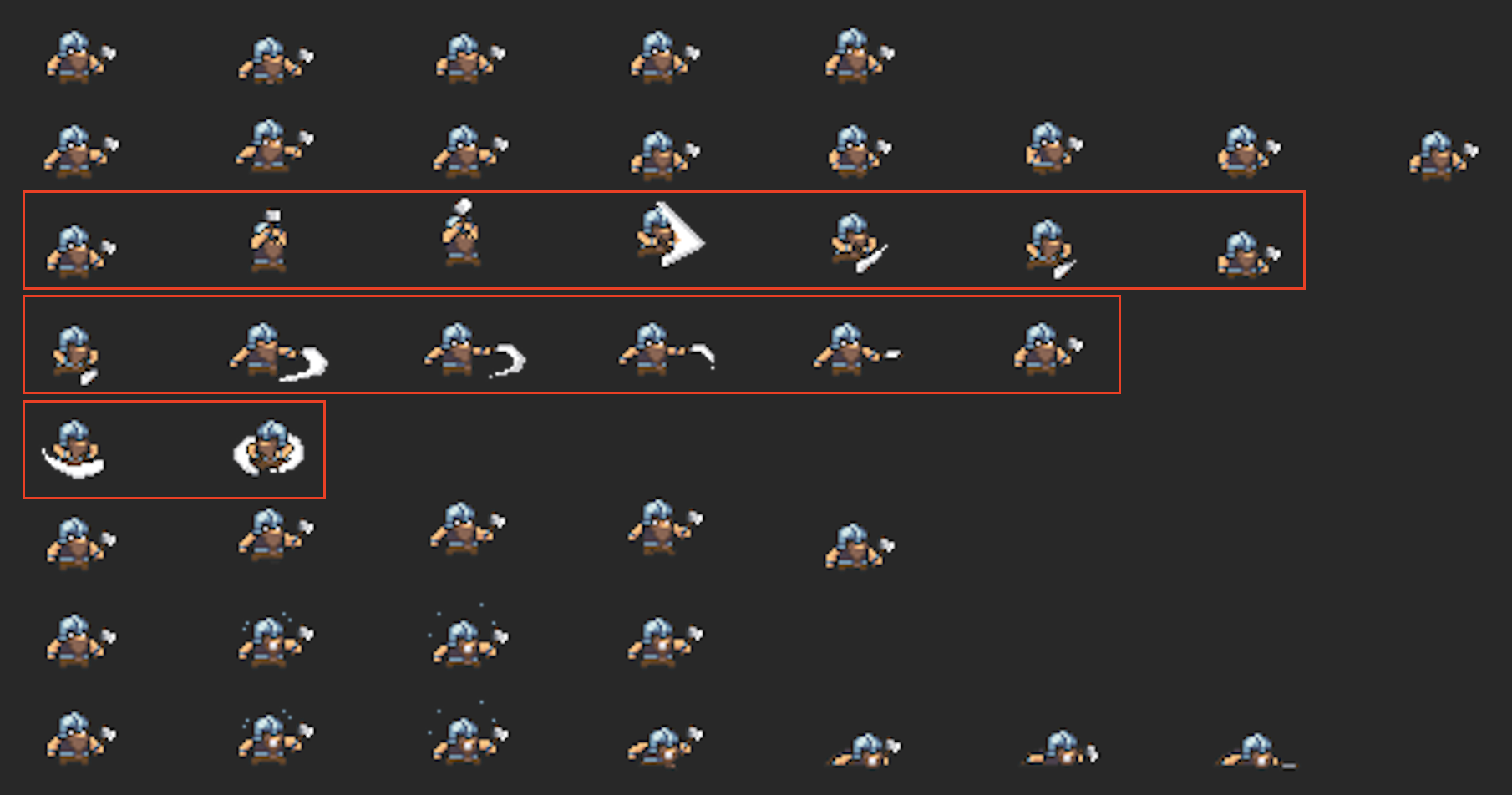 It is OK if a texture for one frame appears on the 2D workspace. 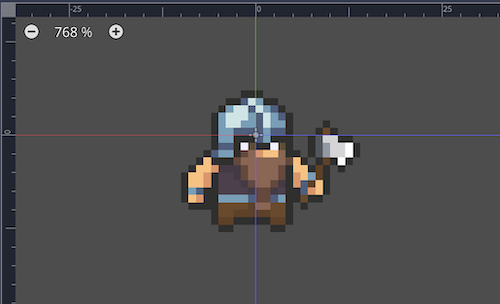 The parent “Player” root node is a KinematicBody2D class, so it is necessary to set up a collision shape. To distinguish it from the Hit Box collision shape we will create later, we rename it “BodyCollisionShape”.

A hit box is a collision shape used to determine when a character is hit by a melee attack, and since it is called a hit box, a rectangular collision shape is generally used. for the “Area2D” and its child node “CollisionShape2D”.

The parent “HitBox” node does not need to be edited, but the signals from this node will be used when scripting later.

To create melee attack animations with the “AnimationPlayer” node.

The following GIF image shows the “right_attack1” animation we just created, played back at 0.5x speed. You can see that the HitBox collision shape is activated (green) only at the timing when the axe is swung down.

A similar procedure was used to create the “right_attack2” animation. The texture of line 4 of the sprite sheet was used. During 0.1 ~ 0.4 seconds of the timeline, the “Position” and “Extents” of “HitBoxCollisionShape” were changed slightly every 0.1 second.

In addition, an animation of “right_attack3” was created. This one used the texture on line 5 of the sprite sheet. The texture is only two frames long, but the two are repeated four times. The “Sprite” node’s “Position” property track was added to make the animation move forward a little and then back.

If “right_attack3” is played back at 0.5x speed, the result is as follows.


Attach a script to the Player node#

To control the player character’s movement and melee attacks, attach a script to the “Player” root node and code it like below: 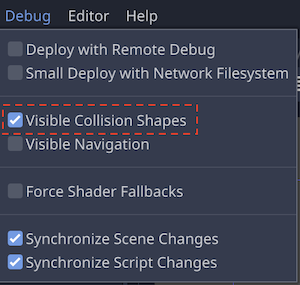 The movement of the player character will look like the following GIF image.

Prepare an “Enemy” scene to check the hit detection of the player character’s melee attacks. Since this is similar to the “Player” scene, I will briefly describe it here.

The scene tree is as follows. 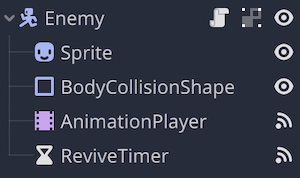 Edit nodes in the Enemy scene#

We will use the assets from itch.io - mystic woods for the sprite textures of the enemy characters. Apply the “slime.png” sprite sheet from the downloaded assets to the “Texture” property of the “Sprite” node.

For the “Shape” property, apply “CircleShape2D” to make the collision shape slightly smaller than the sprite. In this tutorial, this will be the so-called Hurt Box. When the player character’s hit box overlaps this collision shape, the hit detection becomes effective. This control will be done later in the script. 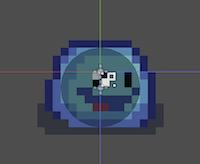 In the Animation panel, prepare the following four animations. All of them are set to change to the texture of the next frame on the sprite sheet every 0.1 second.

Enable the “One Shot” property.


Attach a script to the Enemy node#

Attach a script to the “Enemy” root node and code it like below.


In addition, connect the “animation_finished” signal of “AnimationPlayer” and the “timeout” signal of “ReviveTimer” to the script and edit the respective generated methods as follows:


Add a HitBox signal to the Player’s script#

Make the “Player.gd” script call the hurt method of “Enemy.gd” by the “HitBox” signal when it is hit by a melee attack.

The scene tree is simply as follows.

Place each instance appropriately on the 2D workspace. 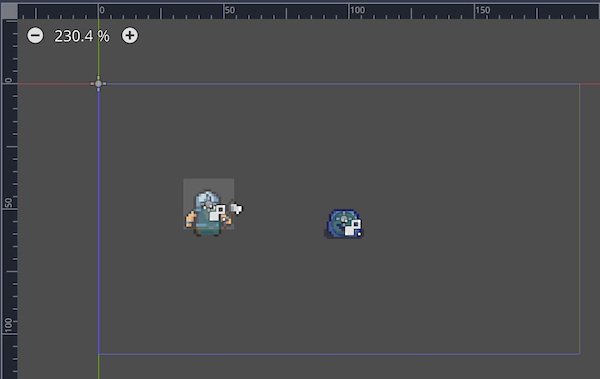 Attach a script to the World scene#

Attach a script to the World scene and code it as follows. The purpose is to pass a reference to the “Player” instance from the “World” root node to the variable player in the “Enemy” node declared in “Enemy.gd”.

Finally, run the project to check the behavior of the hit judgment for melee attacks.

You can see that when the collision shape of the Player’s HitBox node overlaps with the Enemy’s BodyCollisionShape (Hurt Box), the hit detection is activated and the Enemy’s hurt animation is played.

In this article, I introduced a simple hit detection method for melee attacks in 2D games, and the implementation of hit detection using Hit Boxes and Hurt Boxes is relatively easy to understand and can be applied to various games.

For example, in a fighting game, if the attacker has several Hit Boxes for hands, feet, head, etc., and the receiver has Hurt Boxes for the upper, middle, and lower positions, the damage can be changed in complex ways depending on the combination of each Hit Box and Hurt Box.

In a zombie FPS game, you could have different Hurt Boxes for the zombie’s head and body, so that shooting at the head would kill the zombie in one shot, but not the other parts of the body.

Anyway, I hope this article has been of some help.

In preparing this article, we found the following links to be very helpful. We hope you will find them useful as well.