This article explains how to switch between and play multiple sound resources (music and sound effect files) with a single “AudioStreamPlayer” node. 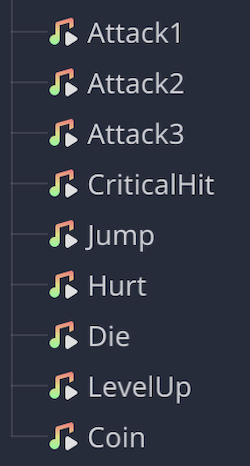 In this tutorial, we will prepare only one “AudioStreamPlayer” node and control the sound resources to be applied to it so that they can be switched and played from a script.

After starting a new project, go to the “Project” menu > “Project Settings” and make the following settings.

Drag and drop the entire downloaded “audio” folder into the file system dock to add it to the project. 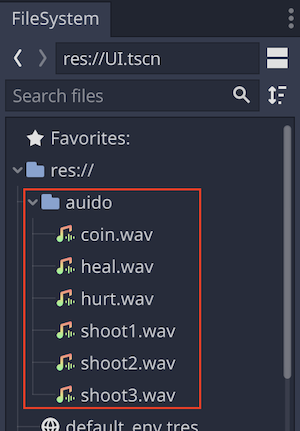 Create the following scene tree. This time, the tree is the simplest ever.

When the scene tree creation is complete, save the file as “UI.tscn”.

Expand the root node “Anchor” so that it is the same size as the screen. The reason for this is that we want to center the child node “SoundLabel” on the screen after this.

This node is used to display the path of the sound resource currently applied to the “Stream” property of the “AudioStreamPlayer” node. This allows you to see at a glance which resource file is currently being set and played when you run the project to check its operation.

This node is used to set a sound resource and play it back. Although the node is originally designed to allow only one sound resource to be set, for this tutorial, we will use this single node to switch between multiple sound resources. The control of this will be done later in a script, but for now, let’s set up the node.


Attach a script to the root node#

Now it is time to create a script to control the configuration and playback of sound resources. First, attach a new script to the root node “UI”. The file name of the script should be “UI.gd”. After attaching the script and opening the script editor, edit the code as follows:


This completes the editing of the script.

Note that this time I used preload so that sound resources are also loaded when the node is loaded. This may be a good way to avoid delay if the game has a lot of processing. On the other hand, if the game does not require much processing, you can use load to load the resource files just before playback.

Finally, run the project or scene to check the operation.

As implemented so far, the following keyboard operations can be used to switch sound resources and play them back.

This tutorial has shown you how to switch between multiple sound resources for playback in a single “AudioStreamPlayer” node. Let’s summarize the important points.

Of course, if programming is not your forte, adding as many “AudioStreamPlayer” nodes as the number of sound resources to the scene is perfectly acceptable. What we have introduced here is just one methodology, so please feel free to do as you wish, especially in the case of indie development.