Many puzzle games such as the popular smartphone game “Puzzle & Dragons” and the original falling game “Tetris,” as well as tactical simulation games such as the “Fire Emblem” series and “Tactics Ogre” probably employ this type of movement.

On the other hand, RPGs such as the “Final Fantasy” series and the “Dragon Quest” series also use this grid-based movement when looking closely at character movement in the era of 2D graphics, when these games appeared as software for the NES and Super Nintendo.

Thus, grid-based movement is used in games of various genres, and its versatility is quite high.

Note that the project file that will be created at the end of this tutorial is located in the GitHub repository . You can also directly check the project by downloading the .zip file and importing the “project.godot” file in the “End” folder with the Godot Engine.

Memo:
Please also use the following articles to help you start creating your game.
Downloading Godot
Project Manager of Godot

First, we would like you to start Godot Engine and create a new project. Let’s name the project “Grid Based Movement Tutorial”.

When the editor appears, set the display size of the game first.


Next, let’s download the assets from KENNEY’s site and use them. This time, We will use an asset pack called 1-Bit Pack . I can’t help but be thankful for this wonderful free material.

After downloading, drag and drop the “colored-transparent_packed.png” file in the “Tilesheet” folder into the editor’s file system dock to import it into your project.

Immediately after importing the file, the image looks blurry. The following steps will give the image the edges characteristic of pixel art.

The first scene is the game world. Let’s create a scene named “World”.

Editing the properties of the TileMap node#

Select the “TileMap” node in the scene tree dock and edit its properties in the inspector.

Continue to edit the resource “TileSet” assigned to the “TileSet” property.

This completes the editing of the TileSet resource.

From here, we will create a TileMap by placing tiles from the “TileSet” resource created earlier.

You should now see a grid separated by 16px in height and width on the 2D workspace. Since “Grid Snap” is enabled, you should be able to easily place tiles along the grid when editing the “TileMap”.


Now we will place tiles in the 2D workspace. Let’s simply surround the screen with “tree” tiles and place “grass” tiles inside them so that the player character, which will be placed later, will not be outside the screen. 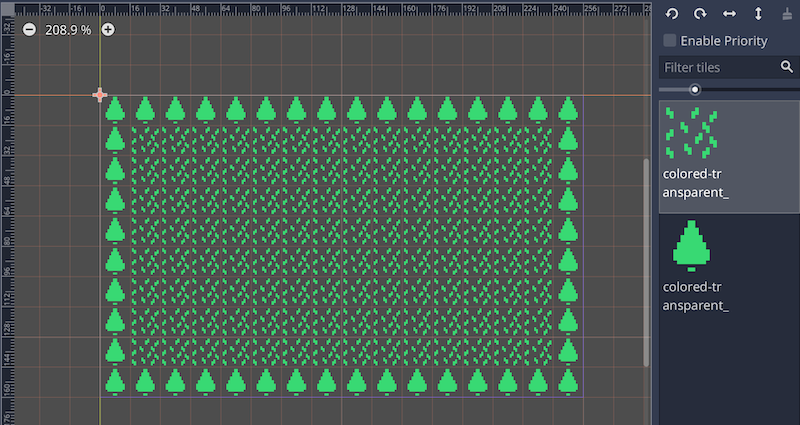 This completes the editing of the “TileMap”.

From here, we will create a scene for the player character. This object will actually be used to move the grid base in this tutorial.

The “Player” scene tree should now look like this.

Editing each node in the Player scene#

The method of setting the texture of a sprite by specifying the range of textures you want to use from a single sprite sheet that contains many textures is used.

This node is used to set the collision shape for the root node “Player”.

This node is very useful for collision detection in grid-based movement, represented as an arrow-shaped collision shape in the 2D workspace. When the arrow and an object overlap, a collision is detected. This can be used to detect collisions with objects in front of the player character and prevent it from moving forward.

First, add an action to the Input Map in the Project Settings so that the player character can be moved by keyboard keystrokes.

*It is also OK to assign Up, down, left, and right arrow keys.

Attaching and editing the script#

Attach a script to the root node “Player”. Create a script file with the file path “res://Player/Player.gd”.


I numbered the scripts #1 ~ #5 in the comments. I will explain in this order.

#1: Defined constants inputs of dictionary type. The value of the inputs is the direction vector of Vector2 type (vector of length 1) to be moved by each action. By the way, the built-in constants (RIGHT, LEFT, DOWN and UP) of the Vector2 class have the following values.

#3: Defined the property raycast. This is a property that refers to the “RayCast2D” node.


#4: Override the built-in function _unhandled_input. This is a callback function that is called as soon as there is input from the keyboard, mouse, joystick, etc. It is similar to another function _input, but don’t worry about the details of the difference here.

In _unhandled_input, a loop is performed on the dictionary type constants inputs defined earlier. If the input is an input map action with the same name as a key in inputs (such as move_left or move_up), the value for that key (for example, Vector2.RIGHT if the key is move_right) is passed as an argument and the method move RIGHT), and calls the method named move. This method move will be defined later.

#5: The method move is defined. When calling this method, it is necessary to pass a value for the argument action.

The variable destination is defined first. The value is the value for the key that matches the argument action from the dictionary type constant inputs (for example, Vector2.LEFT if action is passed move_left) multiplied by the property grid_size. In other words, if the player enters the “D” key, the value will be Vector2(1, 0) x 16 = Vector2(16, 0). This is a vector with a length of one grid in the right direction.

Next, the value of the variable destination defined earlier is passed to the cast_to property of the “RayCast2D” node. This replaces the direction and length of the “RayCast2D” arrow with the key entered by the player. The method force_raycast_update is called in the next line to immediately update this replacement. This is a built-in `RayCast2D’ node.

Now, the grid-based movement control should be implemented.


Adding a Player scene instance to the World scene#

Now that the “Player” scene is complete, let’s add an instance of it to the “World” scene and move it around on the tile map.

The work is now complete.


Checking the operation of the grid-based movement#

Let’s check if the grid-based movement actually works without any problems.

In particular, to make it easier to check the arrow-shaped collision shapes of the “RayCast2D” child node of “Player,” let’s check the “Visible Collision Shapes” checkbox in the “Debug” menu and enable it first. 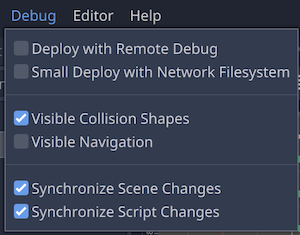 Now, let’s run the project and see if the king can run around in the prairie with grid-based movement. If this is your first time executing the project, simply select “res://World/World.tscn” for the Main Scene.

It can be clearly seen that a single keystroke moves the character only one tile. We can also confirm that the character cannot move in the direction of the “tree” tile.

This completes the grid-based moving tutorial.

We have prepared a sample game that uses this grid-based movement. The project file is located in GitHub repository , so you can download the .zip file from there and import the “project .godot” file in the “Sample” folder and import it into Godot Engine.

This sample is a so-called whack-a-mole game. In the game’s setup, the player controls a king who holds up a sacred ring to the ghosts of the kingdom’s soldiers who emerge from their graves to release their cursed souls.

The keyboard controls are as follows

The ghost must be released within 1 second by the ring or the king will be cursed. If the king is cursed, his Life is reduced by one. The king is cursed to death and the game is over when all 10 lives are lost.

The interval between the appearance of the next ghost is gradually shortened from 2 seconds at the beginning of the game to as short as 1 second.

Finally, I would like to add some additional information about this sample game project. 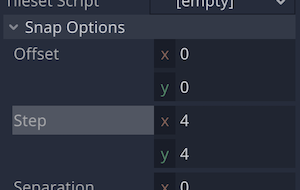 In this tutorial, we have explained the implementation of grid-based movement in 2D games. We hope you will find it useful for your puzzle games, simulation games, and other projects you are working on in the future.