In this tutorial, we will explain how to create a type of game in which you trace and erase drops of the same color, like the very popular Disney Tsum Tsum smartphone game.


Note that the final project file in this tutorial is located in the GitHub repository . You can directly check the project by downloading the .zip file and importing the “project.godot” file in the “End” folder with the Godot Engine.

Memo:
Please also use the following articles to help you start creating your game.
Downloading Godot
Project Manager of Godot

First, we would like you to start Godot Engine and create a new project. Let’s name the project “Connect Colors Start.

Once the editor appears, let’s editing the settings for the entire project.

First, set the display size for the game. In this case, we set the aspect ratio to 16:9, assuming a smartphone screen in portrait orientation.


Keep the “Project Settings” open and configure the settings to substitute the mouse for the smartphone’s touch operation.


With the “Project Settings” window open, add an action to the input map that corresponds to a smartphone touch operation.


Downloading and importing the assets#

Next, let’s download assets from KENNEY and use them. The asset pack we will be using is called Pixel Platformer . I can’t help but be thankful for this wonderful free resource.

Once downloaded, drag and drop the “characters_packed.png” file from the “Tilemap” folder into the editor’s file system dock to import it into your project.

Immediately after importing the file, the image will look blurry, so follow the steps below to correct this.

This will give the image the edgy look characteristic of pixel art.

The first scene is to set the stage for the game. Let’s create a scene named “World”.

Adding nodes to the World scene#

Let’s add nodes so that the world scene will look like the following scene tree. We will edit the properties of each node in turn later, so we can leave them as they are.

The scene tree dock should now look like this. 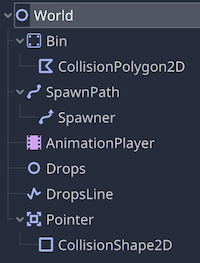 Editing nodes in the World scene#

This node does not need to be edited. StaticBody2D is used in 2D games for obstacles and walls that do not move. In this case, we will use it as a container (bin) to keep falling drops (objects to be erased by tracing) on the screen.

This node is used to move the position of the spawning drop along the x-axis at all times. This makes the drops fall from the different positions at the top of the screen every time. Let’s place it outside the top of the window frame.

This node is used to move “Spawner” back and forth along the path of “SpawnPath” at all times. The “Spawner” property “Unit Offset” represents the starting point of the parent node “SpawnPath” path as 0 and the end point as 1. In other words, by constantly changing this property between 0 and 1, it is possible to make a round trip on the path.

No property editing is required for this node. Its role is just a container for multiple instances generated from a drop scene (to be created later).

This node is used to draw a line connecting drops of the same color when they are traced. This makes it easier to visually check which drop has been traced and how many drops are connected.

This node gives the parent node “Pointer” a collision shape. Considering the operation of touching the drop with a finger or mouse cursor, the collision should be as small a shape as possible.


This completes the editing of each node.

From here, we will create a “Drop” scene to be erased by tracing the same color.


Adding nodes to the Drop scene#

Let’s add nodes so that the Drop scene will look like the following scene tree. We will edit the properties of each node in turn later, so we can leave them as they are.

The scene tree dock should now look like this. 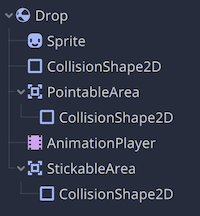 Editing nodes in the Drop scene#

We want the “Drop” scene to automatically fall or bounce according to gravity when its instance is added to the “World” scene. The RigidBody2D class automatically reproduces such physics-based movements according to the node’s properties.

This node is used to give “Drop” a texture (appearance). The method of setting the texture of the sprite by specifying the range of textures you want to use from the sprite sheet that contains many textures imported at the beginning of this section is used.

This node is used to detect when a finger or mouse cursor touches or leaves its drop. No property editing is required, but a group needs to be added.

This node provides a collision shape to the parent “PointableArea”. It should fit slightly inside the collision shape of the root node “Drop” so that it does not react when a finger or mouse cursor touches the edge of the drop.

The first step here is to create a waiting animation for the drop when the finger or mouse cursor is not touching it, and a blinking animation to show it after it is touched. This node will be used to play those animation resources that we have created.

This node is used to detect if a drop is in contact with another drop. No property editing is required, but a group needs to be added.


This completes the editing of each node.


Controlling the Drop scene with a script#

Now let’s attach a new script to the root node “Drop”. Create a script file with the file path “res://Drops/Drop.gd”.

Edit the script as follows.

Edit the method generated when you connect each signal as follows.


This completes the editing of “Drop.gd”.


Creating a scene that inherits from the Drop scene#

The “Drop” scene we just created is a template for the scene we will create. We will now create a scene that inherits the “Drop” scene in the number of drop colors. There are five drop colors: blue, green, orange, red, and yellow. Let’s start with the Blue drop as an example.

This completes the “BlueDrop” scene. Follow the same procedure to create the remaining four color scenes. The name of the root node of the scene and its property “Color” are as follows.

When we have created an inheritance scene with a total of five drop colors, our work is complete.

Controlling a World Scene with Scripts#

We are now approaching the end of this tutorial. Let’s attach a script to the root node of the “World” scene. Create the file path as “res://World/World.tscn”.

When the script editor opens, first define the properties as follows


Next, let’s code the maximum number of drops (50) to fall from the top of the screen immediately after the game starts.

Now let’s run the project and watch the behavior of 50 drops of randomly determined colors falling at the start of the game. Note that when we run the project for the first time, we should set the main scene as “World.tscn”.

The position of the “Pointer (Area2D)” node will be coded to follow the position of the finger or mouse cursor, and the “PointableArea (Area2D)” of the “Drop” instance will detect when the finger or mouse cursor overlaps with it and when it leaves it. The “Pointer” node detects this and sends a signal. Let’s use this to code the process when tracing a drop. 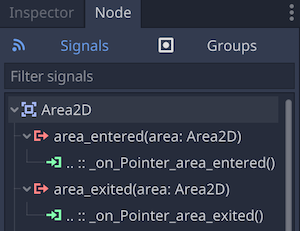 
Next, use the built-in function `_process` to execute the method you want to call every frame (60FPS).

The following methods, which are called in the method get_input defined in the above code, will be defined in order after this.


First, let’s define the methods hold_drop and update_drops_connection to be called when a drop is held down.

If you look inside the method update_drops_connection defined here, you will see that there are further undefined connect_drop and disconnect_drop methods called.

Let’s continue to define these methods.


Within the get_input method, we will now define two methods, erase_drops and release_drops, which will be called when the finger leaves the screen or the left mouse button is raised.


This completes the editing of the “World.gd” script.


Executing the scene to check the operation#

Finally, let’s run a scene to see if it reproduces the movement as expected.

Have you confirmed that the following is as expected?

We have prepared a sample game that further brushes up the project created in this tutorial.


The project file is located in GitHub repository , so please download the .zip file from there and you can check it by importing the “project.godot” file in the “Sample” folder with the Godot Engine.

In this tutorial, We created a puzzle game in which you have to trace the same color to make it disappear. It is the kind of game that one cannot help but feel addicted to. Let me summarize the key points in the creation of the game.