This tutorial introduces Path Finding in 2D games. Path finding is a function that determines the shortest possible path from an object to its destination, for example, when moving an object to a certain destination.

Up to Godot 3.4, the Navigation node was used to implement path finding. This was not particularly inconvenient, but the methodology for game development using it was limited and inapplicable in some areas. This time, I would like to introduce an implementation method using Navigation Server, which was added to Godot 3.5. This is a backport from Godot 4, which is currently under active development. This article is intended for users of Godot 3.5 or later. Users of Godot version 3.4 or earlier should take note.

The final project file for this tutorial is available at GitHub repository . You can also check the project directly by downloading the .zip file and importing the “project.godot” file in the “End” folder with the Godot Engine.

Start Godot Engine and create a new project. You can name your project as you like. If you can’t think of one, let’s call it “2D Path Finding Start”.

Once the editor appears, we should update project settings for the entire project.

First, set the display size for the game.

Next, let’s download assets from KENNEY’s site and use them. The asset pack we will use is called 1-Bit Pack . I can’t help but be thankful for this wonderful free material.

Once downloaded, drag and drop the “colored-transparent_packed.png” file from the “Tilesheet” folder into the editor’s file system dock to import it into your project.

Immediately after importing the file, the image will look blurry, so correct this by following the steps below.

The image should now have the edges characteristic of pixel art. The imported tileset will be used later for tile maps and player character textures.

The first step is to create a “World” scene to prepare the game world. 1. Select “Scene” menu > “New Scene”.


Adding and editing a TileMap node#


Adding and editing the Line2D node#

The “Line2D” node is used to make the explored and determined path visually clear.

From here, we will create a scene for the player character to move along the found path.

Adding and editing nodes to the Player scene#

Add nodes to the “Player” root node to make the scene tree look like this.

Each node is then edited.

This node is used to apply texture (appearance) to the “Player” scene.

This node sets the collision shape for the “Player” root node of the KinematicBody2D class.

This node was introduced in Godot 3.5 as a backported node from Godot 4. A parent node (in this case, the “Player” node) adding this node to its children will automatically avoid collisions with obstacles and will be able to move by path finding. It seems to be controlled by being registered in the navigation map of the default World2D. For more details, please refer to Godot’s official online documentation. 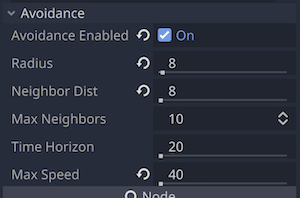 Adding an instance of the Player scene to the World scene#

Attaching and editing scripts to the Player node#

Now connect three different signals of the “NavigationAgent2D” node to this script. 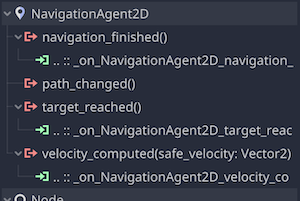 The first one is the “velocity_computed” signal. This signal is sent when NavigationAgent2D has completed adjusting its velocity to avoid collisions with surrounding objects.

The second is the “target_reached” signal. This signal is sent out when the next moveable position on the path to the final destination is reached.

The third signal is “navigation_finished. This signal is sent out when the final destination on the route is reached.

After connecting each signal to the script, write the necessary code in the generated method. The code is as follows.

Let’s click on the tile map appropriately and check if “Player” moves along the path search without any problem.

In the “Player” scene, we implemented path finding using the mouse position as the destination. From now on, we will implement path finding for another object that moves with the moving “Player” as its destination. However, there is no need to worry, since most of the work is the same.

Let’s make multiple animal objects gather around the “Player” instance object we just created. We will now create an “Animal” scene for the animal objects.

Adding and editing nodes in the Animal scene#

Add some nodes to the “Animal” root node and make the scene tree as follows.

Then edit each node.

This node is used to give texture (appearance) to the “Animal” scene.

This node sets the collision shape for the “Animal” root node of the KinematicBody2D class.

In the “Animal” scene, as in the “Player” scene, this node is used to avoid collisions with obstacles and to enable movement by path finding.

This node is used to periodically update the position of the moving destination (instance node of “Player”).


Attaching and editing scripts to the “Animal” node#

From here, we will attach a script to the “Animal” root node and write code to control the “Animal” scene. Create a script with the file path “res://Scripts/Animal.gd”. When the script editor opens, code as follows.


Two signals must then be connected to the script.

The first one is to connect the “velocity_computed” signal of the “NavigationAgent2D” node as in the “Player” scene. 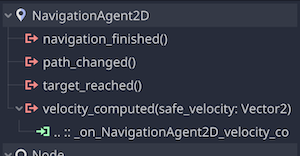 Once connected, write a move_and_slide method in the generated _on_NavigationAgent2D_velocity_computed method to control the movement of the “Animal” node.


The next step is to connect the “timeout” signal of the “PathTimer” node to the script.


The “Animal.gd” script is now complete.


Adding an Animals node to the “World” scene#


Attach a script to the “World” node and edit it#

Attach a script to the “World” root node and edit it, adding multiple instances of “Animal”. Save the script with the file path as “res://Scripts/World.gd” and when the script editor opens, write the code as follows.


The “World.gd” script is now complete. Let’s run the project and see how multiple instances of “Animal” approach “Player”.

The number of head_count properties defined in the script can be easily edited in the inspector, since it comes with the export keyword. I increased the number of “Animal” instances to 100 as a test, but it got stuck at the end. If “Animal” were a zombie, it would be a hellish scene.

I have prepared a sample game that further brushes up the project created in this tutorial.

The project file of the sample game is located in GitHub repository , so please download the .zip file from there. You can check it by importing the “project.godot” file in the “Sample” folder with the Godot Engine.

In this tutorial, we implemented the new Navigation Server added in Godot 3.5.

For a simple 2D route search like this one, it was relatively easy to implement using NavigationAgent2D, although there are still some itchy points, such as the problem of getting caught in a corner when using a TileMap without a margin tile. However, we hope that this will be improved in future updates.

Let me summarize the key points of this project.