If all of these controls were coded in script, the code would tend to be rather long and complex. On the other hand, Godot’s “AnimationTree” node can be used to reduce the amount of script code and improve readability. In this article, we will show you how to implement a state machine using the “AnimationTree” node.

After starting a new project, do some preliminary project settings.

The window size is set as follows.

Added the following actions to the input map for the player character’s movement and attacks.

I have downloaded the asset pack from the following link.

Use the three sprite sheets “player.png”, “slime.png” and “objects.png” in the downloaded folder. I can’t help but be thankful for this wonderful asset.

The three sprite sheets (.png files) are added to the project by dragging and dropping them into Godot’s file system.

If the added image appears blurry (it will by default), select the imported file, select “Presets” > “2D Pixel” from the “Import” tab, and click the “Reimport” button. The image will now be displayed with the edges characteristic of dot images.

Create a “Player” scene for the player character. The scene tree will look like this: 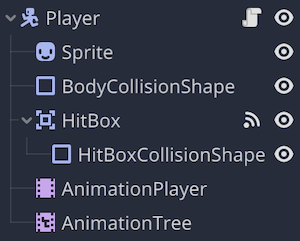 Edit a node in the Player scene#

In the inspector, the “CircleShape2D” resource was applied to the “Shape” property, and the size and position were adjusted as follows. 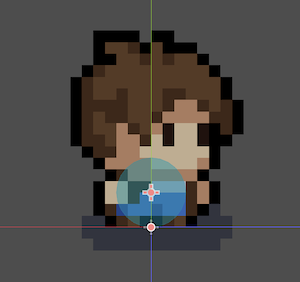 This node is for the Hit Box for melee attacks. There is no need to edit this node. The implementation of melee attacks is explained in detail in the following article.

The “RectangleShape2D” resource is applied to the “Shape” property. The size and position of the collision shape of the Hit Box will be changed in the animation of the “AnimationPlayer” node, so we will leave them as they are and set them when creating the animation. The “Disabled” property is also changed in the attack animation, but since the Hit Box needs to be disabled except during the attack, we leave it turned on.

Confirm that the “Root Node” is set to the “Player” node in the inspector.

In the animation panel, create the following six types of animations.

The naming convention “attack1” and “attack2” is based on the following video.
YouTube - Name Files Logically

Using this node, we will create a state machine to control the animation prepared by “AnimationPlayer”. 1. In the inspector, select “New AnimationNodeStateMachine” for the “Tree Root” property. This is a setting to enable state management of animations.


Attach a script to the Player node#

Attach the script to the “Player” node and edit as follows:

As mentioned earlier, the method die_on_hurt_anim must be called within the “hurt” animation. At this point, you should go back to the Animation Panel and edit the `hurt’ animation in the “AnimationPlayer” node.

The “AnimationNodeStateMachinePlayback” resource class, which is the value of the “AnimationTree” node’s “Parameters” > “Playback” property, has a method called get_current_node that can be called from the current node. Calling this method will get the current animation node. This is useful when you want to make an if statement conditional on the current node.

Connect the “body_entered” signal of the “HitBox (Area2D)” node at the end of the script and edit the generated method as follows:

This time, a “Tree” scene and a “Slime” scene were created separately for operation checks. Both scenes can inflict damage by colliding with the “HitBox” in the “Player” scene. The “Slime” scene also has a “HitBox” node, and when the “Player” hits the “Slime”, the player side takes damage and its life is reduced by one. The life property of the “Player” is set to 3, so that the player will die after hitting Slime three times. 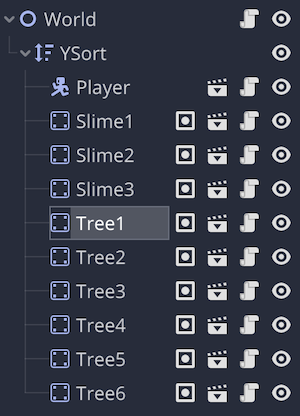 You can see how the state machine smoothly transitions the animation according to the situation.

In this article, we explained how to use a state machine to transition the animation (state) of the player character. Let’s look back at the key points of our work.

In fact, if you have a large number of animations, the nodes and the lines connecting them in the animation tree panel may become cluttered and difficult to understand visually. In such cases, it is a good idea to write them down on a piece of paper with a pen first to organize them in your mind.

Of course, you can also create a state machine with a script instead of relying on the “AnimationTree” node, so if you are not comfortable with editing the animation tree panel, you can try that.