This article is a tutorial on how to implement grid-based path finding in 2D games using the AStar algorithm. For 2D pathfinding that is not grid-based, please refer to the article 2D Path Finding in Godot3 . I hope you will choose the article that best suits the game you want to make.

The final project file in this tutorial is located in the GitHub repository . After downloading and extracting the .zip file, you can import the “project.godot” file into the Godot Engine to see the project directly.

In this article, we will implement grid-based routing using a search algorithm called AStar. It is useful when you want to automatically move objects along a grid from the current location to the destination. For example, this method is ideal for puzzle games where you move pieces on the board, or strategy simulation games where you move characters of both sides on the board to fight each other.

AStar, also known as A*, is an algorithm that searches for the shortest path from the start point to the goal point while avoiding obstacles. In the case of Godot engine, you do not have to code the algorithm from scratch by using the AStar class. We will use it in this tutorial.

The following settings are made in the “Project” menu > “Project Settings”.

This time I used an asset pack called Board Game Icons from KENNEY’s site. I can’t help but be thankful for this wonderful free material.

After downloading, drag and drop the following files from the “/kenney_boardgameicons/PNG/Default (64px)” folder into the file system dock of the Godot editor to import them into your project.

First, create the “Game” scene that will be the main part of the project. Select “Node2D” as the root node, add the necessary nodes to it, rename them, and create a scene tree as shown below. 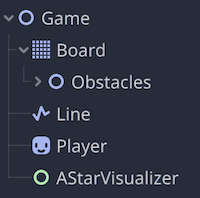 To edit the “Board” node as the board on which the player’s pieces move in the game:

The “Obstacles” node is used as a container (parent node) for multiple obstacle nodes to be placed on the tile map. Therefore, this node itself does not need to be edited.

Create a scene of an obstacle to be placed on the tile map. 1. Select “Sprite” as the root node and rename it to “Obstacle”.

Return to the “Game” scene and add 10 instance nodes of the “Obstacle” scene you created to the “Obstacles” node and place them at appropriate locations on the tile map. However, be careful not to place them at the grid coordinates (0, 0), since the player’s pieces will be placed there. 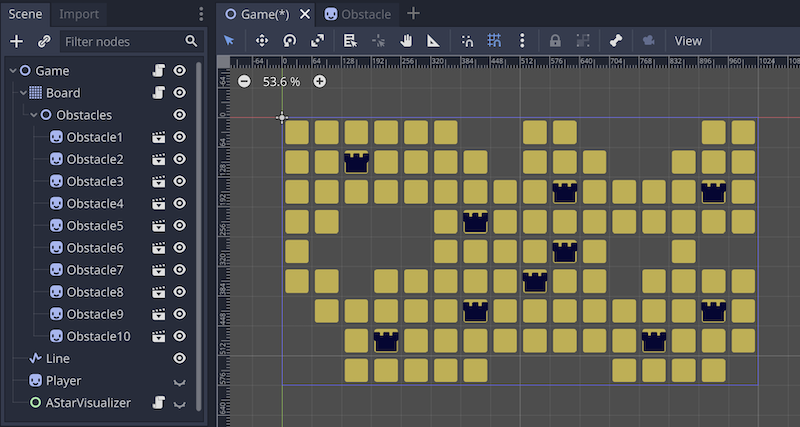 This node is used as a player piece to be moved on the board by path finding using AStar.

Attach the script to the Board node#

Attach the script to the “Board” node and edit the code as follows:


This will add AStar points to the coordinates of the cell where the tile is placed in the “Board (TileMap)” node, and each point will be connected by a line. Furthermore, the points that correspond to the coordinates of the “Obstacle” instance are deactivated, and the lines connecting them are also deactivated. The network of AStar finally formed in this way is used as a route.

The update_path() method will be called in the script of the “Game” node. When calling this method, pass the current position and the destination position of the “Player” node to the arguments start and end, respectively, and the Player node will move along the shortest path on the AStar network that has been formed.

Of course, the positions of the “Obstacle” instances is not connected to the line because the AStar points are disabled, so the Player node cannot move to the positions.

Attach a script to the “AStarVisualizer (Control)” node#

To visualize AStar points and lines, attach a script to “AStarVisualizer” and edit the code as follows:


With this script, the AStar points and lines are drawn on the screen and the AStar network can now be visualized. When you run the project, you should see the following. 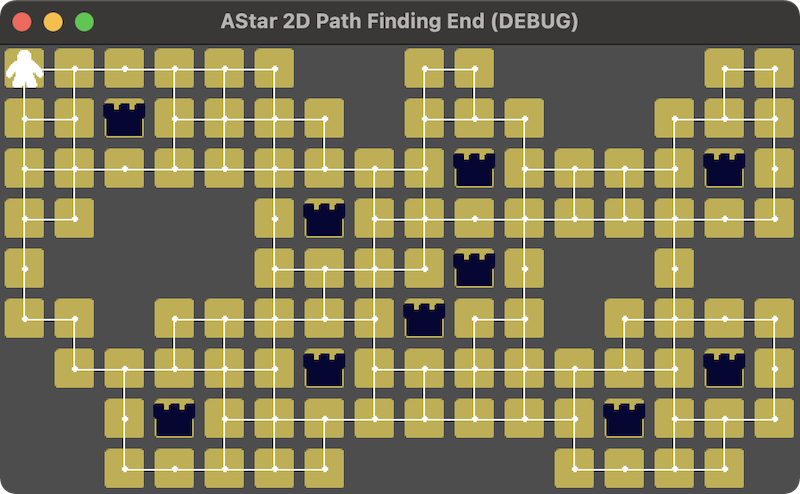 Attaching scripts to the Game node#

The last step is to code the “Player” node to move when the mouse is pressed.

After attaching the script to the “Game” root node, edit the code as follows:

If you run the project, you should see the following GIF image.

In this article, I introduced a grid-based 2D path finding using the AStar algorithm. The project we have created should work equally well with different placement of tiles and obstacles.

Finally, let me summarize the main points of this tutorial.

Also, you may be able to make an interesting game by adding the following arrangement.

The following resources were very helpful in preparing this article.